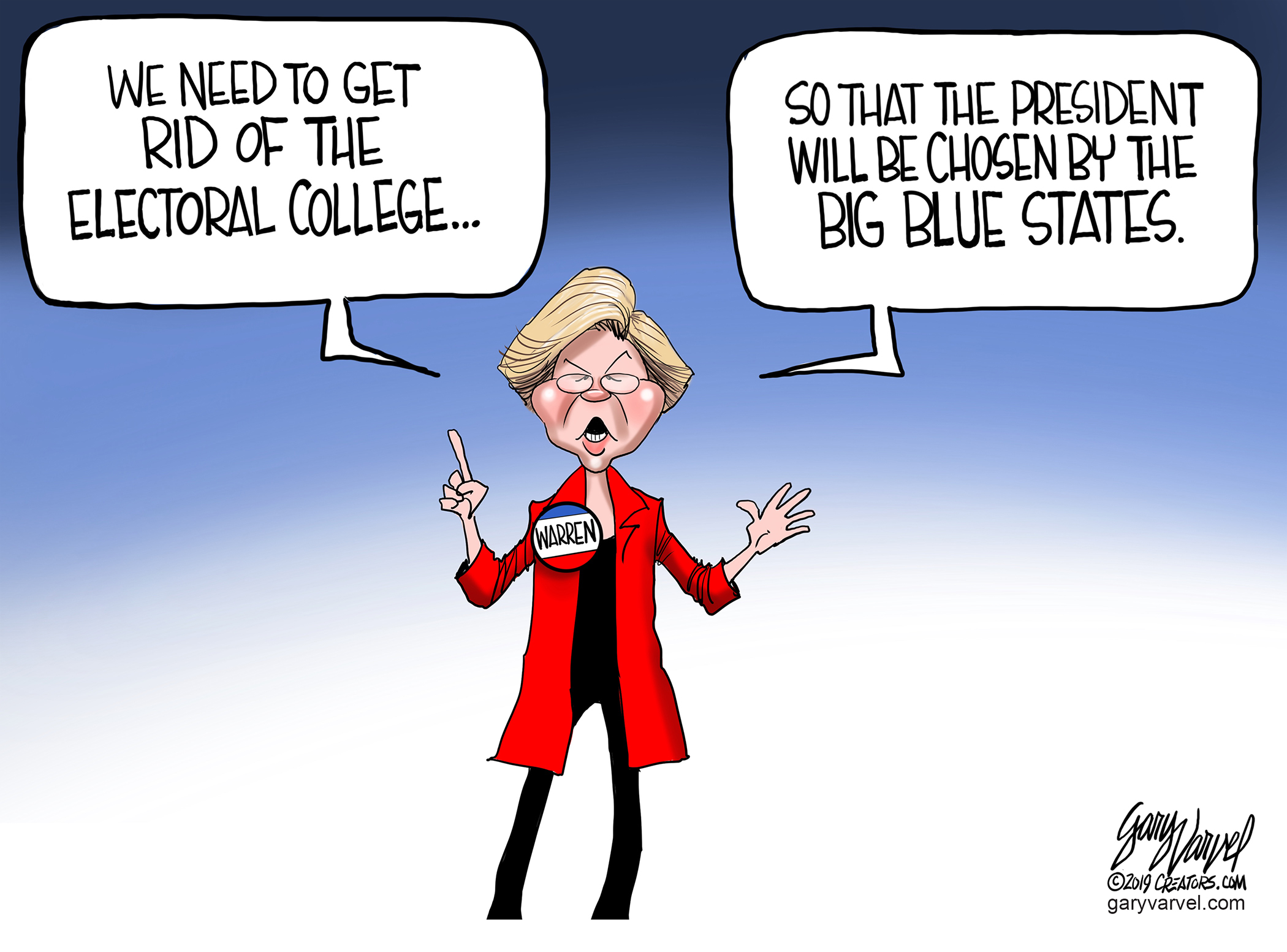 In this video clip, she said, “Call me old fashioned, but I think the person who gets the most votes should win.” According to one poll earlier this year, 60 percent of Democratic voters support abolishing the Electoral College, and much of the mainstream media seems to agree. After the 2016 election, The New York Times attacked the Electoral College as an “antiquated mechanism,” Time magazine published an article arguing the Electoral College was designed to protect slavery, and E. J. Dionne Jr. of The Washington Post compared it to a game of chance in a casino.

This is right in with Russian President Vladimir Putin’s ideology, after he said months ago that liberal democracy in America has “become obsolete [and] outlived its purpose [since] it has come into conflict with the interests of the overwhelming majority of the population.” Both Warren and fellow enemies of American liberalism — the political and moral philosophy that emerged from the theories of John Locke, specifically his Second Treatise on Government, which is to provide people the right to be free from the control of a tyrannical or corrupt government — are effortlessly seeking to undermine the foundation upon which the American Founding Fathers built and what Abraham Lincoln called government of the people, by the people, for the people.

What Warren and others, as inspired by the Russian autocrat, fail to admit that the essence of true democracy does not necessarily include  government by a majority vote by citizens, which is why the Father of the U.S. Constitution James Madison argued for a constitutional republic with protections for individual liberty over a pure democracy. The reason was that in a pure democracy a “passion or interest of will, in almost every case, [would] be felt by a majority of the whole […] and there is nothing to check the inducements to sacrifice the weaker party.” The Electoral College, as an example of a constitutional republic, gives the same voice and vote to states that do not have highly populated cities, as opposed to those that do. The purpose was to prevent such big states, which normally think homogeneously from becoming despotic — if this is not a true sense of democracy, what would be?

Warren’s opposition to the Electoral College, as political editor for the Federalist John Daniel Davidson explains, although couched in the facile rhetoric of “every vote counts,” she means just the opposite. Under a system of direct democracy, votes in places like Wyoming, Iowa, and every other small state wouldn’t really count at all. The country would effectively be ruled by New York and California — and indeed by the residents of the largest cities in those states. She and the Democrats know that most large cities are blue and that the ongoing urbanization of America would give them a huge advantage if they were able to run their votes up in those districts and ignore the rest of the country.

It certainly would have been enough to put Hillary Clinton in the White House. In fact, the collapse of Democrats’ “blue wall” in 2016 is largely what’s behind the current assault on the Electoral College. Competing for the votes of working-class whites in Pennsylvania and Michigan doesn’t appeal to progressive 2020 candidates like Warren for the simple reason that she’s unlikely to win their votes, and she knows it.

The alternative, as Davidson again points out, what Warren and the Democrats would like to see, is exactly what what James Madison called the “tyranny of the majority.” In this case, it would be a tyranny whose enormous power was concentrated in Washington, D.C., to an even greater extent than it already is. Under a system based on direct democracy, federalism would wither and die. As the historian Allen Guelzo noted last year in National Affairs, once we eliminate the Electoral College, “there would be no sense in having a Senate (which, after all, represents the interests of the states), and eventually, no sense in even having states, except as administrative departments of the central government.”

Alexander Hamilton, in Federalist Paper 68, which is all about the Electoral College, insisted that while it is “desirable” that the “sense of the people should operate in” the selection of America’s commander-in-chief, it is “equally desirable that the immediate election be made by men [and women] most capable of analyzing the qualities adapted to the station.” [Emphasis added] “Call me an old fashioned,” but being old an old fashioned believer in the Electoral College our Founding Fathers created is what will keep providing a voice to the ones Warren and the Democrats want to make voiceless.